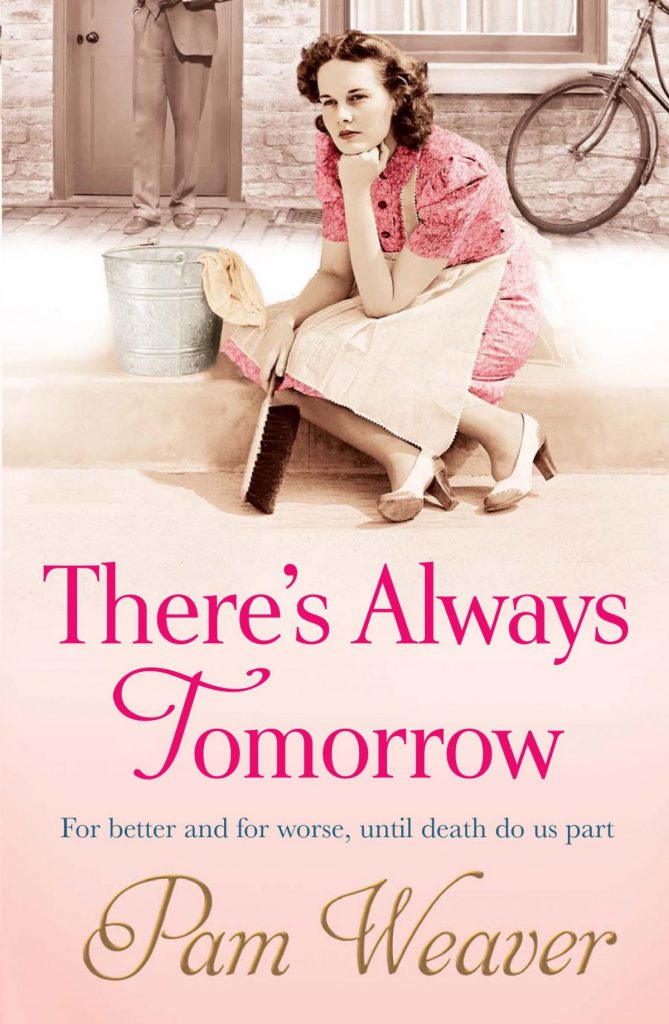 “A very good story line, well written and the characters were well developed. It was difficult to put the book down as you always wanted to know what happened next. I hope that Pam Weaver publishes another book soon.” B

“An excellent novel which provides the reader with suspense and surpise from being to end. A novel to be enjoyed by everyone.” L

I love writing about villains and in There’s Always Tomorrow, Reg was particularly nasty…

While Dottie and her friends walked around the town, their husbands were left on the beach with the kids. Reg flipped through the pages of the Littlehampton Gazette. Nothing much there. He was just about to fold it up when Connie tottered towards him, a long candlestick of mucus and sand hanging from the end of her nose.
Alarmed, he called to the kid’s father, ‘Tom!’
Cor, love a duck,’ said Tom as he saw her. Lifting her half-filled bucket towards her father, she said, ‘Eat tend cakey, Daddy.’
‘Hang on a minute, sweetheart, let Daddy clean you up first.’ With the practised hand of an expert, her father put one hand on the top of her blonde head to hold her steady while he fumbled in his pocket for his handkerchief. Connie sneezed and the candlestick grew longer.

Jack, who was cuddling Gary on his lap, laughed aloud. Reg shuddered with disgust.
‘Tend cakey, Daddy?’ Connie said as her face emerged from under the voluminous handkerchief.
‘I’d love to,’ said Tom, pretending to take a piece. ‘Ummm, delicious. Don’t forget your Uncle Jack and Uncle Reg.’
‘Yum, yum,’ said Jack obligingly.
Connie turned towards Reg. ‘Not for me,’ he said quickly.
Tom ruffled the child’s hair. ‘Uncle Reg is full up,’ he said. ‘But I could eat you up!’ He growled and, snatching her in his arms, he kissed her neck. Connie giggled happily and when he put her down again she wandered back to the area of sand which served as her kitchen.
‘Not up to sand pie, Reg?’ Tom said good-naturedly.
‘Looking after kids is woman’s work,’ Reg muttered.
‘Rubbish,’ said Tom. ‘I love being with all my kids. I’m a dab hand at changing a nappy too.’

Reg shook his paper disapprovingly and hid behind it again… You’d better keep them kids well away from me, he thought sourly. But a couple of minutes later, Tom’s little brat was on walking towards him. Reg glanced around helplessly. The other two men were gone: Tom was doing something with Christopher and Jack was walking Gary towards the sea where the other kids were splashing about at the water’s edge.
‘Clear off,’ Reg hissed.
But Connie was on mission. Holding out her bucket of sand, she struggled to steady herself, tottered and made a grab at his trousers. She stumbled against him and fell. At the same time, Reg noticed a wasp crawling along the sand nearby. As Connie pulled herself to her feet again, Reg glanced around to make sure nobody was watching him, and then gave Connie a good shove with his leg. She sat down heavily on top of the wasp. A few seconds later, her heart-rending screams brought the others running.